| where the water meets the sky | 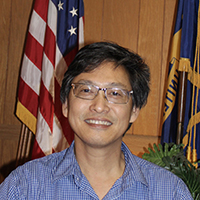 On October 4, 2000, a short discovery flight in a Cessna 172 over NYC’s Hudson River planted a seed that came to fruition many years later. As a practicing architect, James was not only newly exposed to a panoramic bird-eye view of the majestic Manhattan skyscrapers, but he also had his first taste of the indescribable joy and freedom that comes with general aviation flying.

September 30, 2016 proved to be another pivotal date, after another discovery flight, this time in a Columbia 350, led to Crystal River. There he and his wife, Nancy, happened to have a fortune cookie, which proclaimed: “you will come to realization in your life that changes you forever.” That realization was that Crystal Aero Group – and the Crystal River community – was something special that they wanted to be a part of.

James embraced the challenge wholeheartedly, determined to make it his purpose to carry on the Crystal Aero Group mission, business culture and principles that Tom Davis and Gudi Davis had established. As the owner and CEO of Crystal Aero Group, James plans to not only maintain its excellent reputation earned over 40+ years, but also build an enhanced platform on which aviation students from around the world can continue to discover themselves while becoming successful career or recreational aviator.